In his role as Office Secretary, Werner de Coninck is a “spider at the centre of the web”. He helps support policy and provides advice based on his role in supporting management. He is responsible for (financial) administration, purchasing and additional projects, including minor legal tasks.

Werner’s professional approach can be described as service-oriented and correct. He knows exactly what Kouwenaar Advocatuur’s clients want. His approach is analytical, discreet and honest. 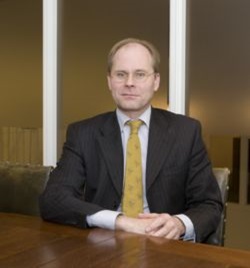 Werner grew up in Zeeland Flanders, where he spent many years in an active role as chairman of the JOVD (liberal youth movement). Werner studied history at Leiden, specialising in Dutch history.

In 2003 an article from his doctoral thesis ‘From d’Ee to Hontenisse … ” [names of places in Zeeland Flanders] was published in the Archives of the Royal Zeeland Scientific Society in Middelburg. In 2006 he also contributed, as a historian, to the Documentary ‘Zeeland Flanders is Dutch!’ which was broadcast in Zeeland and Flanders.

Werner de Coninck has a warm interest in politics, which resulted in his active work as a councillor for the VVD [Dutch liberal political party] – with territory in his portfolio – in the municipality of Nijkerk, between 2006-2010.

In the town in which he lives, Nijkerk, he is currently involved a crowdfunding attempt to realise new and renewable (LED) lighting on and around the ‘most beautiful Tower in the Netherlands’, the Tower of Nijkerk. Werner is also involved in his local May 4 Committee [4 May is the date on which the Dutch commemorate victims of the 2nd world war], as well as being a member of the Disputes Committee of the Dutch Labrador Association.

Werner is a member of the Amicitia Gentlemen’s Society.